Proceeds will go to the existence of this site.

Hail web adventurer!!! You have discovered the homepage of the #1 PvP guild!  What wonderful luck! Aren't you happy to be here?! No? You're not? There is probably something horribly wrong with you! You better act fast and read some enlightening philosophy to start down the golden road of self improvement! (note: there is no actual road, you have to pretend.)


We are unaffiliated with "Not a Cult" the publisher, but you can find them here: NotaCult.media

We won. Our guild has appeared in magazines and academic papers, Fansy has been immortalized in a game or two, and Pokemon became real. We can finally stop playing video games and spread happiness to the real world. Congratulations, FoH!

In the meantime, I and some other oldtimers will be on Zek here and there. The price for EQ finally reflects what it's worth, so jump on.

The NotaCult.com domain name is for sale. I'm asking 5 figures, as that's what it's worth to me. Contact info on the whois is correct.

Once again, we are unaffiliated with "Not a Cult" the publisher, but you can find them here: NotaCult.media
They were very nice in their emails, so they get a free link. 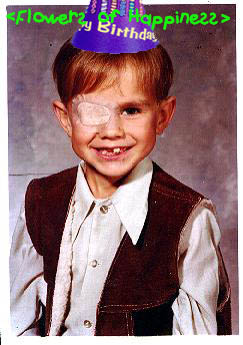 The guild that started out as a joke has turned out to be, well, a joke. At least to everyone that is forced to interact with us.

As a flower, you may have become used to the people laughing at you. They'll call you a newbie, if not a fag newbie. They'll laugh at your e-friends. And worst of all, they'll criticise how you play the game.

Don't listen to them.

Keep this in mind when you log-in today: the only correct way for a flower to play is the way that makes it the most happy. There is nothing more important, for every flower's playstyle is unique. The little game you have made inside of the game from inside your head is a precious thing.

Have a Happy 5th, Flowers of Happiness.

Fragging on the CS:S server, a possible EQ celebration, a WoW raid, the FoH history test, and a request for you to post your earliest Flowers of Happiness memory.

As World of Warcraft's 2nd largest guild (server-wide) many people rightly question the types of people who would play in Flowers of Happiness. Maybe they've noticed that some FoH members repeatedly train instance groups and run away from Alliance, or that some of our members don't realize they're even in a guild until it's too late.

For whatever reason, the image for the common idiot on Frostwolf is, "hey, that person is so fucking stupid only their mom and FoH could love them"

And today Anar will put that image to rest, and bring up a new question:

Is Frostwolf the dumbest server in World of Warcraft?

Having been kicked out of FoH, Anar went on a tour of Frostwolf's finest. WON'T YOU COME ALONG?

Guild #1: True Heroes
Goal: True Heroes wants to recruit 150 members in a week. How can they possibly find 150 heroes in such a short amount of time?
Result: Anar yells that he needs a guild in Orgrimmar. Lets watch the True Heroes recruiting process: 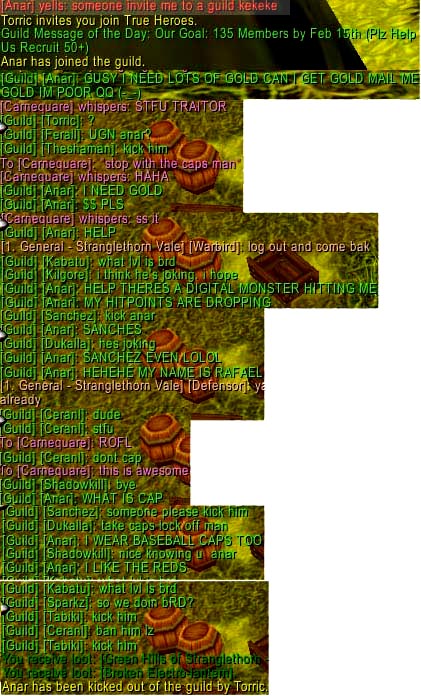 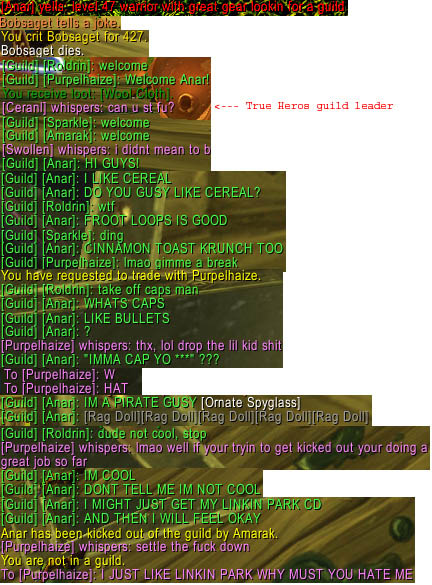 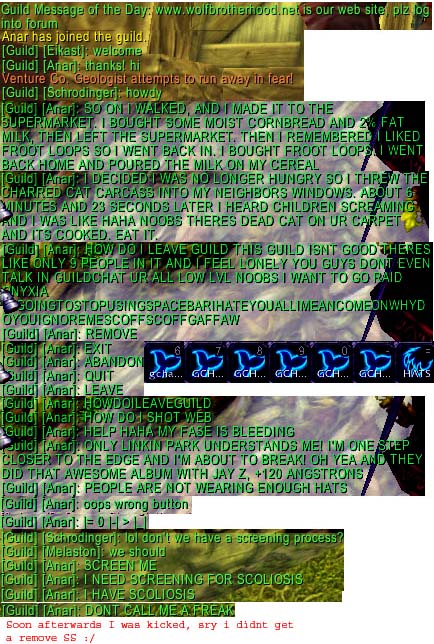 Guild #4: La Migra
Goal: To invite members who can talk about the newest hit by Linkin Park and Jay-Z.
Result: They respond to Anar's idiotic banter with acceptance, meaning he finally found a guild that fit him, leaving him no choice but to beg for a kick. 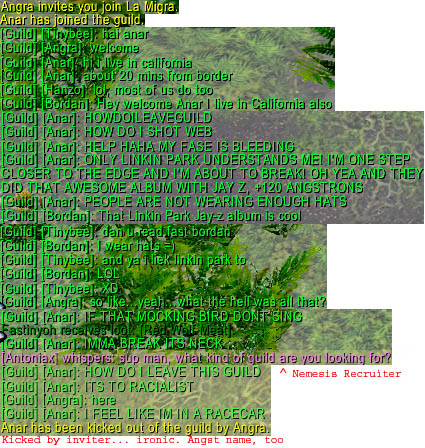 Guild #5: Nemesis
Goal: To be one of the top raid guilds on the server.
Result: I'll give you a little peak inside the application process of this soon-to-be uber guild:

It's so cute it hurts! Do they accept Anar? Do they take more shit than the other guilds? Are they really hardcore alliance raiders to the core of all that is hard?

Did you save your wisdom teeth?

Hello, I'm so happy that your'e here! Our "World of Warcraft" video-game guild has gotten off to a great start. People across the internet are already excited to see us all back together. It seems everyone is enjoying their time with the flowers!

The first night I played World of Warcraft, I entertained everyone with a story about a halfling doing the Stein of Moggok quest. They loved it.

People couldn't get enough of the guildchat.
And then Pensi logged on.

For some reason everyone tried quitting the guild. However, as you can see above, typing "/guild remove" doesn't work.

World of Warcraft players are creative though, and they decided to spam us so we'd remove them. That way they don't have to learn the /guildquit command. What fun!!

None of the would-be quitters could top the sheer determination of Torrn, which is documented in this image. (If anyone knows where he is playing now tell him to please come back to Frostwolf, as he is sorely missed.)

Information wants to be free. We couldn't hide the /guildquit command forever, and it nearly destroyed our Warcraft video-game community. Note how the fallout is displayed with the background of a drowning elf, showing the pure emotion we felt at the loss of so many members. 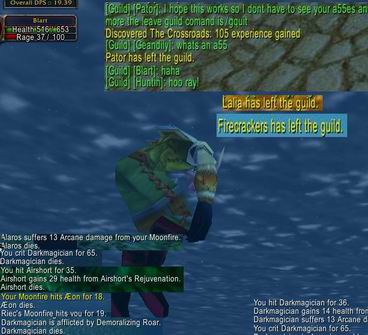 All was not lost however, as Flowers tend to die and sprout at alarming rates. The night ended with me finishing my story, much to everyone's delight.

Random News: Guild Tabards are ready, and have been since the 27th or so. Flowers and Flower friends be sure to jump online December 4th at 2:00pm PST for the PvP raid. And don't forget to yell ascii text to the other team!

Thank you Chadlek for the new page graphics! Be sure to visit his professional design company.

All World of Warcraft stuff property of Vivendi Universal. All Everquest stuff property of Sony Online Entertainment, even the pictures of Mcfatass.  HTML template leeched from Fireman Comics, used with permission by Kevin Bowen. Everything else belongs to Notacult.com, which includes but is not limited to this: 8===D